May is New Zealand Music Month and over on the Memories In Time blog I posted a list of questions about how has music played a part in your life.

By chance this week the Heritage New Zealand newsletter contained a link to a performance being put on at Alberton by Cathie Harrop. That name rang bells and so a quick Google search later and I found Cathie's website and confirmed that she was the television presenter that I'd remembered from the early 70's.

Wandering through the website I found a link to this album and the songs on it. Instantly I was back in my childhood, where this album featured. I listened to the tracks on the website and knew before I heard them what they were going to sound like and what came next.

We played this record on the stereogram, lifting the lid to display the turntable (I'm trying to find a picture of what I think it was like on Google. It might be time to talk to my brother and get him on the task too). My memory has it in the lounge in our house against the internal wall and it's funny because as I think about this, that was also the wall where the piano was when I started to learn that. Did the piano replace the radiogram... did we get the newer stereo when we go the piano? I wonder if there are photos to show the furniture in the room.

I had forgotten the name of Cathie's TV show... Scribbles... but do remember the excitement of having one of my pictures shown on TV (a brown lion with a mane of gold wool).

When we had children I sang  "Horsey, Horsey" to them (actually I think I sang that a lot to them), But just the chorus, I'd forgotten the verses. I guess that's also true about our own history, unless we record it we will only remember parts of the story and not the details. I've got lots more music related stories to be told and one story leads to another.

So now you have a choice, if you remember Scribbles and Cathie's songs, go listen to them again on Cathie's website (and even if you don't they are classics to listen to). If not why not have a look at the questions on the Memories in Time blog and write down some of your own memories. 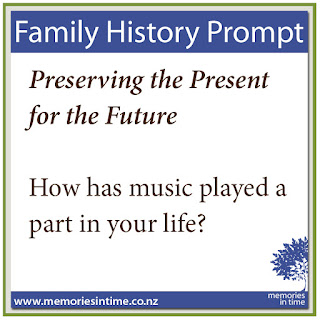 Email ThisBlogThis!Share to TwitterShare to FacebookShare to Pinterest
Labels: Preserving the Present for the Future

Where there's a Will

What difference does that make you might ask. Well instead of being able to search just for the person who has a probate, now you are able to search for other names in the description.

So for example I am interested in the Thorn family of Chagford, Devon, so I could search for probates as illustrated below. 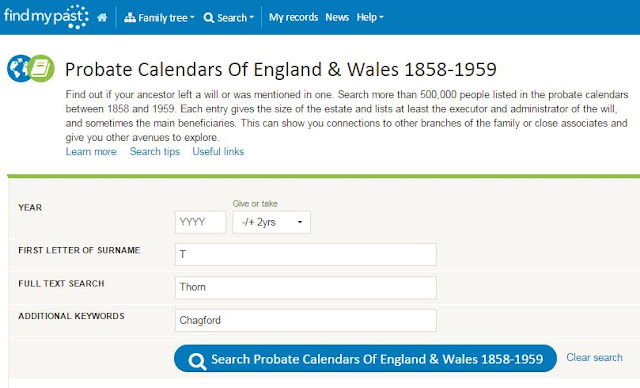 When I do this I get the following results: 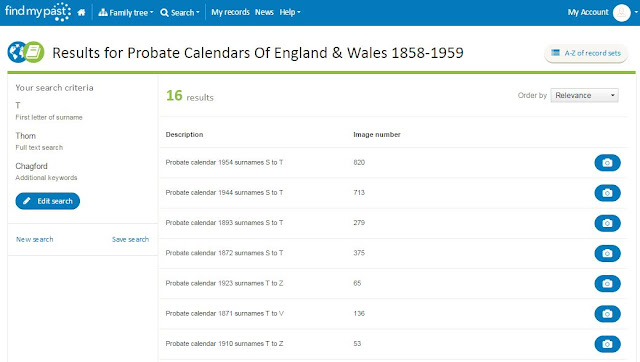 I can click on the camera icon on the right hand side which will take me to the image and I can zoom in to to find the entry I am interested in. I can attach it to my tree if I want.

(For those who research in Devon, Anna Hoskins is the grandmother of Prof W G Hoskins)

So the search works really well, but here's where the power of the full text search kicks in. If I search without the T like this: 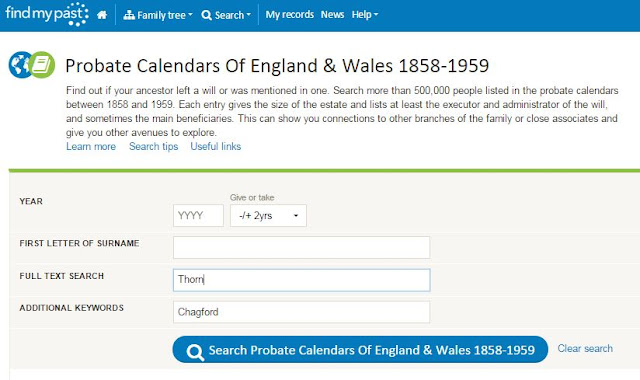 Then I get these results: 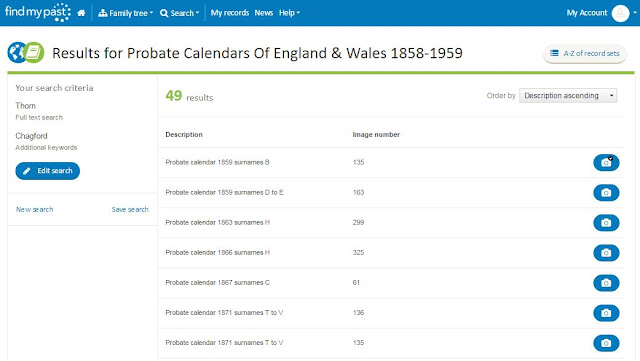 To save you scrolling up, I had 16 results and now I have 49 results. Now to be fair some of those results are for the place Thorn in the Chagford area, however there are also gems like this:

Here Ann Middleton's probate is being proved by her nephews John Hole Thorn and William Thorn.

There's new newspapers on Findmypast today, including some more for Aberdeen. My grandfather was born in Aberdeen and so I re-searched (I have searched before) for Thomas Urquhart my great grandfather (that's him in the top right photo on my blog header).

However further down the page there was an entry for my Thomas, which lead to the Aberdeen Journal, 24 May 1935. 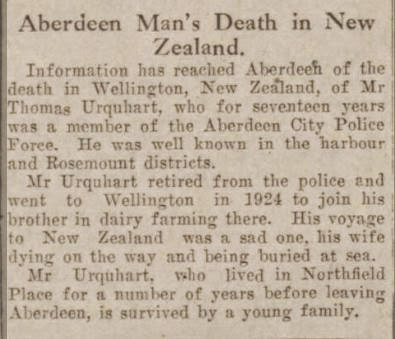 So even though he had left Scotland 11 years previous, his death (which actually occurred in January) was reported in the Aberdeen newspapers.

I have details of his immigration to New Zealand, including the death of his wife. 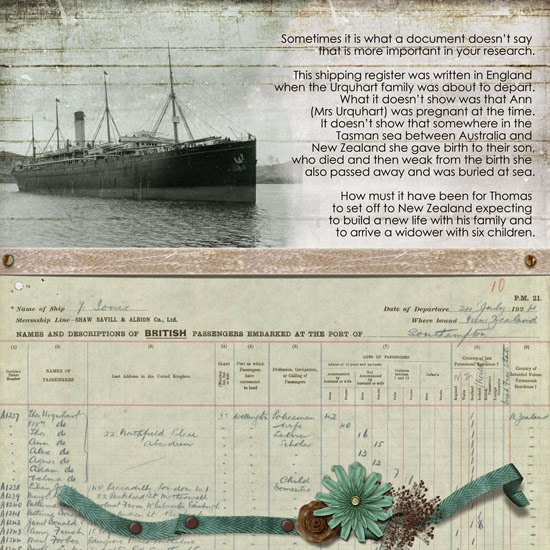 Did I learn anything new... well yes... in particular the part about him being well known in the harbour and Rosemount districts.

I knew that he had been in the police force from the birth certificates of his children, so last year I contacted the Grampian Police Museum and got a wonderfully prompt reply including Thomas's career information from the Aberdeen Police register and a photo of him. 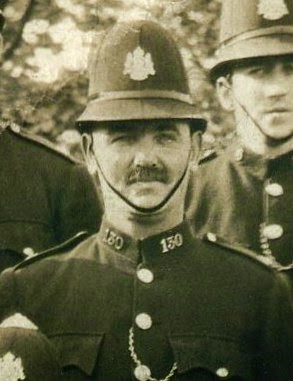 Having been a Mason, he was appointed to the Police force in March 1907 and resigned in July 1924. His record gave not only his date of birth, but that of his wife and all of his children (these being added to during his career). I also know what ailed him during those years with his leave for sickness being recorded.

Lessons learned:
1. Sources get updated all the time, it pays to try them again.
2. Follow blog's etc. for sources so that you know when updates are made. In this case Findmypast.com.au News lead to my discovery of new Aberdeen newspapers.
3. Look for news items not only in a country of death but also in a country of birth, allowing for time delays for the news to get home.
4. Check for more unique sources, in this case following his occupation as a police constable lead to the Grampian Police Musuem which lead to his career and family details.

Thank you FindMyPast!
Thank You South West Heritage Trust and Parochial Church Council!
Thank you to whoever indexed this record and got the surnames right.

With news of the new additions to the Devon parish record collection on the FMP website, I thought it was about time to have another look through for my elusive three x great grandparents, William Thorn and Mary Hill's marriage.

For my whole researching life (that's 30 years plus) I have known their children's baptism dates from the family bible that came to New Zealand with their son Edmund Hill Thorn, but never their marriage date. First child, John Hole Thorn was born in 1850.

Looking up the marriage indexes (on fiche originally and later on the internet) there was no marriage that matched for William Thorn and Mary Hill and specifically none in their home parish registration district of Okehampton, Devon.

So tonight I looked up marriages in Devon for William Thorn 1848-1850, with a keyword of Hill. Just one result appeared with the bonus of having an image attached.

How quick can you click on a camera button..... very quick, and there it was, after a 30 year search. There might have been some whoops of delight and my husband telling me to breathe. 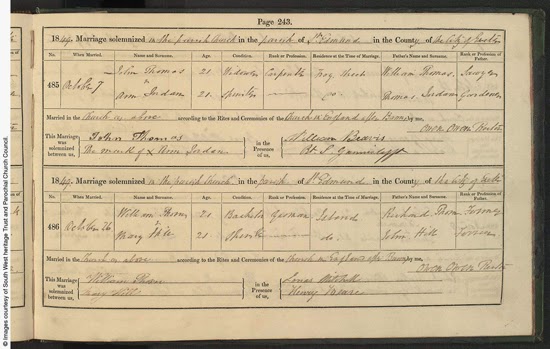 A close up of the names and of course now that I see it, I can also see how William's surname has probably been indexed and wonder why I never saw it before. 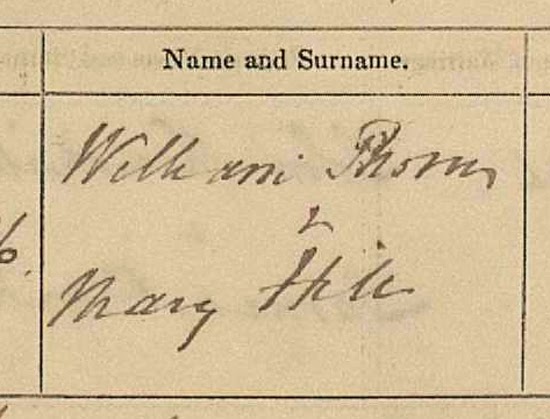 Trying those marriage indexes again and "Yes" there it is:

Lessons learned:
1. Write surnames in your own handwriting - tidy handwriting, messy writing, swoopy loopy writing and then see what the letters look like.

2. Keep track of what is being released on websites for your areas of interest, they may include the brick wall breaker.

Database and files to update now... but I wonder what else I could find tonight.

Postscript: Of course now I have also worked out why my ancestor, their son, is called Edmund, which appears nowhere else in the family. The marriage took place at St Edmund's, Exeter.

So it's school project time for my daughter and she has finally got to the family history assignment.

She's made a beautiful 3D family tree and I got to go teach her class how to get started on their family history research which was fun.

Now she is up to her inquiry project which is to write a narrative about one ancestor in particular. Does she pick one that I have lots of info and stories about...No! Instead she picks the one ancestor that I have been stuck on for years but who I recently bought a death certificate for and found that he was killed by a falling tree... which of course it the most fascinating thing about him as far as she is concerned and the sole reason he was picked for her project.

So Ferdinand Koch, step into the spotlight as this month you are going to have a lot of research focused on you and in particular to what your life was like.

Just in case anyone reads this and wonders if it is their Ferdinand Koch...

William Burkey Hannam and Ellen McGregor married in Melbourne in April 1859. Their first son William was born in March 1859, information that I had gathered from other family researchers and the Victorian Pioneer Index of Births, Deaths and Marriages.

Today I decided to buy his birth certificate. The great thing about the Births, Deaths and Marriages Victoria is the instant gratification of being able to download the certificate the moment you have paid for it.

The blank in the marriage column was no surprise, but for the other births on this page, not only do you get the marriage year and place but also the number of other children the couple had previously (living and dead).

I googled to try and find out more about the hospital. It opened in 1856 to provide medical care for under privileged women and after two years it moved to a purpose built building in Carlton, North Melbourne, opening on 22 October 1858. So when Ellen gave birth as a single mother in March 1859 the hospital was still really new.

This photo is from the history section of "The Women's, Victoria".

Following on from this was the best find of the day... that Midwifery Record Book No. 1, from Aug 19th 1856 to Mar 15th 1879 with images available online. There is also an index to these records put together by volunteers.

The original can be seen and enlarged here.

The informant on William's birth certificate was the house surgeon, Mr James Barnett who had been appointed in 1859 at a salary of £200 per annum. Later in the year the hospital became the first in Australia to train nurses and midwives.

It seems to me that in this case being poor certainly had its advantages.

It was a sunny day

I remember sitting in the sun on the verandah at Nana & Grandad's farm at Arahura with Mum. It must have been the late 1970's and she was just starting to look into the family tree.

She was showing me a page from the Cyclopedia of New Zealand about Edmund Thorn (a name that meant nothing at the time) along with a collection of letters. These letters were typed from the original letters that Edmund, his wife Anna Maria and his brother Ernest had sent home from New Zealand to Devon, England. A descendant of the English recipients had inherited them and had made contact with my great aunt (there will be more about this later).

It was from this collection that I started my addiction/passion for family history... thanks to Edmund Thorn.

This is my attempt to share some of my research with the rest of the family... the postcards of our past.
Posted by Fiona at 09:13 No comments: